Alma was organized as the Middle River Lutheran Church on October 12, 1880, at the home 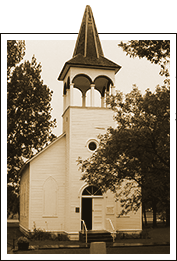 of Martin Gunderson. The congregation became the second organized church in Marshall County. It was the first Lutheran Congregation formed in Marshall County. Pastor C. Saugstad presided over the organizational meeting. The name was changed to Alma Lutheran because people often looked for the church near the city of Middle River.

A ladies aid as it was formerly called was organized in 1883. The first congregational officers were elected in 1884. The congregation was part of the Norwegian-Swedish Evangelical Church. Elias Aus was the first Pastor. The first church was built in 1893 for a cost of $673.65!

Rev. Martin Bjornson served as Pastor beginning in 1907. He translated some of the writings of Professor Georg Sverdrup, the founder of the Lutheran Free Church. This translated work is available through Mercy and Truth Publishers, a ministry of the Alma Free Lutheran Church.

The name of the congregation was changed to Alma Lutheran Church in 1959. Ground breaking for the present church took place on May 21, 1961. The older church structure is on the Fair Grounds in Warren, Minnesota. The congregation meets there for its annual church picnic. The new church building was dedicated in July of 1962.

A few years ago, Alma decided to go on its own and is no longer in partnership as a parish. The present Pastor is Reverend Dennis Gray who has served Alma since 2004.